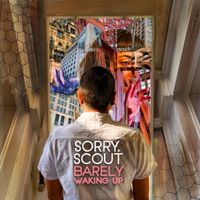 Hey Scouts! We're proud to announce that on Saturday August 10th, we'll be releasing our new ep "Barely Waking up" at one of our favorite music venues in town, Off Broadway, and with new friends Thames and old stage buds Fluorescent.

Barely Waking Up, recorded at Native Sound studios by recording wizard Ben Majchrzak and mastered by Brad Sarno of Blue Jade Audio Mastering, is the culmination of songs written in the last few years that deal with sexual assault and the normalization of toxic masculinity, heart break, frustrations at the hands of a country moving toward authoritarianism, police brutality (on a local and national scale), and finding the strength to go on in the midst of all this chaos.

We're more than thrilled for you to hear this record, which we received generous go fund me backing for and which we couldn't have done without you, our fans. And we cannot wait to play with Thames and Fluorescent.

According to the River Front Times, Thames is "the logical evolution of the modern-day boy band. They're not doing pop or choreographed dance moves — that's kid stuff — but they are effectively blurring the lines between alternative and indie rock in a radio-ready way unlike any other". We haven't had a chance to share the stage with them and are stoked!

And our buds in Fluorescent are described as " a sonic dreamscape of textures with a colourful edge of hypnotic tones leaving you with a perfect balance harmony, chaos, and pure dissonance." They put the sound in the phrase "wall of sound", delivering a pummeling fuzzed out shoe gaze explosion that has to be seen, and heard (maybe while wearing ear plugs just to keep them ears intact) to be believed.