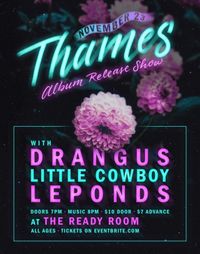 Indie Rock band Thames celebrates the release of their debut LP "Spotlight" with Leponds, Drangus, and Little Cowboy! Saint Louis indie rock band Thames is back and better than ever with the release of their debut LP "Spotlight" this fall. After their last release (Plagues of the 21st Century) in May 2018 the band spent over a year and a half in the studio as well as embarking on their first official summer tour this past summer. The band has shelved their usual contemporary rock sound and delved deeper into electronic and pop elements, combining synth sounds of the 80s and electronic dance music of the 2000s. Categorized as a "dark modern pop" record, Spotlight has garnered over 3,000 streams in the first 3 days since the release.

Opening the night are fellow local acts Little Cowboy, Drangus, and Leponds, all of which played at the RFT Music Showcase this summer (along with Thames). Drangus released their debut EP "Love, Dust to Dust" earlier this summer to rave reviews, a record that inspired many of the sounds found on Spotlight. Leponds released her EP "Lean To" this past September, a beautiful indie acoustic record. Little Cowboy is currently in the process of releasing their debut record.